Depression and Self-Medicating with Food 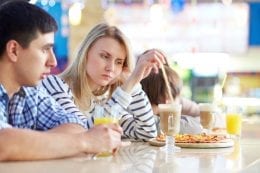 How food is used as a coping mechanism

The treatment for depression combines psychotherapy approaches such as cognitive behavioral therapy with anti-depressant medications such as selective serotonin reuptake inhibitors (SSRIs). Many individuals with depression however choose to use food to mask their feelings. Depression can be linked with guilt and shame and studies have shown that eating sugary, salty and greasy foods can result in a surge of dopamine in the brain. Dopamine is a “feel good” neurotransmitter that is increased during happy emotions and pleasurable feelings such as exercise, eating and sex. It is also increased in drug use, which is why many illegal substances are so difficult to quit. Although many tasty foods can bring pleasurable feelings to individuals who have depression, these pleasurable feelings are only temporarily and will soon disappear to be replaced by feelings of depression, which includes sadness, guilt and loneliness. As a result individuals become addicted to these salty and sugary foods and will go to extreme lengths to use this food to mask their feelings of depression, even if it means acquiring an eating disorder. Using food to cope with depression does nothing to resolve the underlying issues and only creates a vicious cycle that exacerbates the problem.

Covering up feelings of sadness, loneliness and guilt with food can result in worsening depression and the development of an eating disorder. Although there is no cure for depression, symptoms can be better managed with an all-encompassing treatment approach, which includes medications, psychotherapy and problem-and-emotion-focused coping strategies such as yoga, meditation, relaxation techniques, and journaling. Psychotherapy approaches that are used to manage symptoms of depression include cognitive behavioral therapy, interpersonal therapy and dialectal behavioral therapy. First-line medications used to treat depression are known as selective serotonin reuptake inhibitors (SSRIs) and include the following: